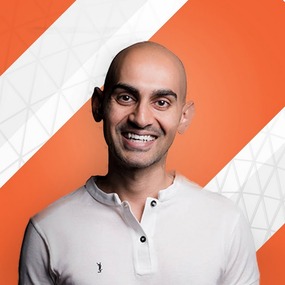 If you are looking ahead a career in digital marketing, you must have heard about Neilpatel.com as your ultimate resource to acquire knowledge about SEO. But who is Neil Patel?  What is his career journey? How he became the top influencer on web that world love to follow? Let’s find out.

Neil Patel is a well-known blogger, Search engine Optimization expert, and a serial entrepreneur who has launched several successful start-ups. He is also a well-known author of several books, including "The Definitive Guide to Growth Hacking" and "Hustle: The Power to Charge Your Life with Money." Renowned as a New York best-selling author.

Being one of the top influencers on the Web, he has been named by Forbes as on top 10 marketers.

He is a self-made millionaire and created all his wealth from online ventures as an SEO expert. Some of his popular consulting gigs like Crazy Eggs and KISSmetrics are already helping businesses grow organic traffic.

While Entrepreneurship Magazine ranked his created companies among the 100 most brilliant companies, he is listed as one of the top 10 marketers. Neil Patel has proven his exceptional SEO skill set by contributing to revenue growth for companies like HP, Amazon, Airbnb, General Motors, NBC, and Viacom.

He is also counted among the top 100 entrepreneurs under 35 by United Nations.

Born in London, UK, on April 24, 1985, he was moved to Orange Country, California, with his family at 2. He has always been surrounded by entrepreneurs that driven his mindset toward success. At the tender age of 15, he sold burned movies and CDs to students in his high school years.

He then started making a few thousand dollar profits by selling black boxes and hacking the satellite TV cards. He also started his first job at the age of 15 at Knotts Berry farms. His responsibility primarily includes picking up trash and cleaning restrooms.

Neil joined Kirby vacuum, where he was involved in a door-to-door sale for a $1600 vacuum. He offered free cleaning to homeowners to achieve his sales target. He gets a few hundred dollar commission on each sale.

His first online venture was a website - Advice monkey, for which he saved $5000 from his black box selling venture. The inspiration for his online venture was Monster.com. But after investing heavily in the website, he has no money left for advertising. Then he decided to learn internet marketing and apply the fundamentals in his new venture.

Although Advice Monkey didn't succeed on the transactional front, it became popular. Then he joined the college course at Cypress Community college to continue his higher education. Soon, he got his first marketing consulting client for $3500 per month. It motivated him with the idea of starting an internet marketing agency - Advantage Consulting Services. He started this venture in partnership with his sister's boyfriend.

Then he won over many new clients that motivated him to continue his journey of success. He invested heavily in Vision Web Hosting and lost around $ 1 million. But it didn't deter him from co-founding Crazy Eggs.

Wall Street Journal named Neil Patel among the top Web influencers in 2005. He started his first blog in 2006 - ProNet Advertising. Search Engine Journal ranked the blog as 'Best Social Media Blog' and counted it among Technorati's top 100 for the first time.

Together with the serial founder Hiten Shah, Neil Patel co-founded Crazy Egg in 2006. It is the first testing platform helping people to improve their website conversion rate as early as 30 days. Today over 3,00,000 websites use Crazy egg to visualize the website visitor's through a heatmap. The venture has 6500+ followers on LinkedIn. President Obama recognized Neil Patel as one of the top 100 entrepreneurs under the age of 30.

The Origin of KISSmetrics

Another venture by this due - KISSmetrics, was launched in 2008. True Ventures funded it. It is a consortium of entrepreneurs, designers, and developers passionate about helping businesses grow and monetize. It is person-based product analytics helping businesses understand, identify and improve certain metrics that drive online business.

He bought a place in Hotel in Seattle with a better entrepreneurial community and no income tax.

His internet marketing consultancy helped to pay for the crazy egg software development. In 2011, KISSmetrics fought a 12-month class action lawsuit for violating flash cookie technology private policies. Later, the company got clearance from all the charges after penalizing a few hundred thousand dollars.

IN 2014, Forbes included Neil in the top 10 marketing experts. In the same year, this entrepreneur launched a 100000 visitor challenge on Neilpatel.com, his blog.

Today, he is inspiring millions of readers across the globe.

Why Neil Patel has been labeled as the top influence can be assessed from the facts and figures below:

He made most of his net worth from the ventures like Crazy Egg, KISSmetrics, Hello Bar, and consulting gigs.

Belonging from a middle-class family, his path to success was not easy. As influential people surrounded him, it channeled some positive energy to turn him into a great leader.